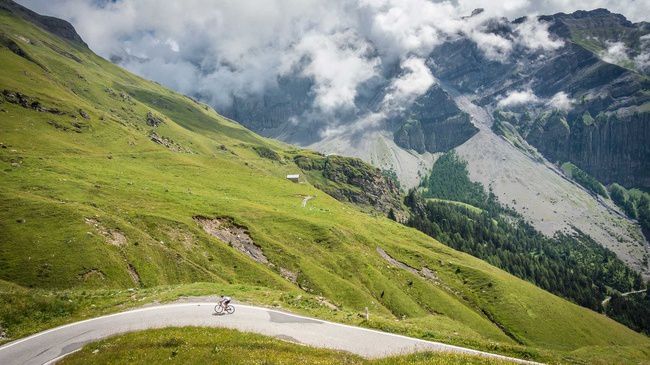 The Sanetsch is the finest pass you have never heard of! At 26km in length and with a difference in altitude of 1690m, the pass road starts in Sion and could be compared to the famous Stelvio, but with less traffic.

The ascent starts in the Rhone valley and meanders through the vineyards (Valais is Switzerland’s largest wine-producing canton by volume) before reaching woodland and a series of hairpin bends which lead to pastures and the summit (alt. 2252m) near the Tsanfleuron glacier. Lights are a must for the 800m tunnel two kilometres from the pass itself.  The road stops at Sanetsch Lake, a few kilometres on from the summit. Does that mean having to turn back? No! You can attach your bike to the aerial cable car and go down to Gsteig near Gstaad, 1000m further down. You then climb to the Pillon pass (alt. 1546m) and make for Les Diablerets before arriving back on the Rhone valley floor at Aigle. After that, you have two ways of returning to Sion: taking the train, or cycling back for 55km on the wonderful level cycle path along the Rhone.  The Sanetsch-Gsteig aerial cableway operates between June and October. The timetable may be found here: http://www.gstaad.ch/en/cable-cars/summer/operating-times.html