This is a fairly flat and easy out and back ride from Sun City Mesquite.  The ride starts with a mostly downhill ride to Sunset Greens; a slight uphill ride to Riverside Road (NV 170); a slight up and down ride to and through Bunkerville and back to Hafen Lane; a relatively flat ride back through the two roundabouts and passed West Pioneer Boulevard; then a pretty good climb to the finish.  Total Ride Distance:  19.4 Miles.

1.  If you open the route in Google Roadmap or Google Hybrid (pulled down from the "Relief Map" tab) you will get a more up-to-date view of the roads and paths.  Some of the other maps are dated.

2.  Riverside Road can be ridden either on a pedestrian/bike path (shown on the map) or on the roadway itself.  There is some traffic, particularly heading from Bunkerville back into Mesquite.

3.  Part of the ride within the city of Mesquite is also on a separate pedestrian/bike path (shown on the map) starting off  of Hafen Lane and ending at Old Mill Road.

4.  This mapping program tends to under-compute the total ride mileage by roughly 10%, based on mileage for this ride when it has been actually ridden. 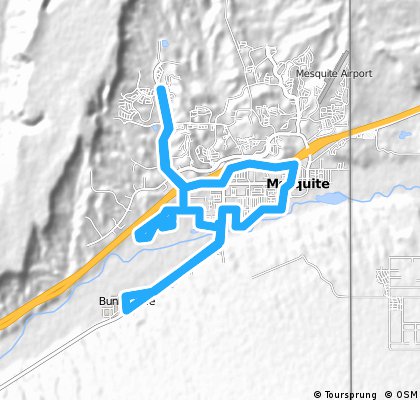