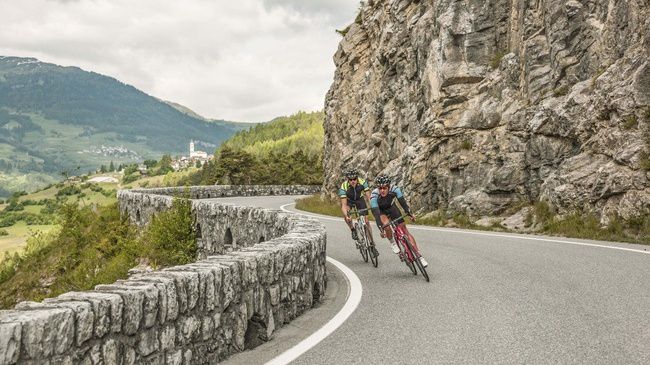 From Davos, Europe’s highest town, the loop covers a distance of 117km and 2780m of climbing. The Albula, the ascent to which starts 30km further on, is arguably Switzerland’s prettiest pass.

National Cycling Route 6 is dotted with unspoilt villages featuring houses with richly decorated facades. After Bergün, the loop passes beneath some spectacular bridges on the Albula line of the Rhaetian Railway (the entire line is a UNESCO World Heritage Site) before reaching the summit at alt. 2315m after 23km of climbing. The pass regularly features on the Tour de Suisse: in 2013 Frenchman Thibaut Pinot reached the summit first to take the King of the Mountain jersey, but it was the Portuguese Rui Costa who won stage seven in La Punt at the end of the descent.  Having crossed part of the Engadine 27km further on, you reach Susch and the foot of the Flüela. Another Tour de Suisse favourite, this 12km-long pass road summits at alt. 2383m between the Flüela-Weisshorn (alt. 3085 m) to the north and Schwarzhorn (alt. 3147 m) to the south. A spectacular descent brings you back to Davos.