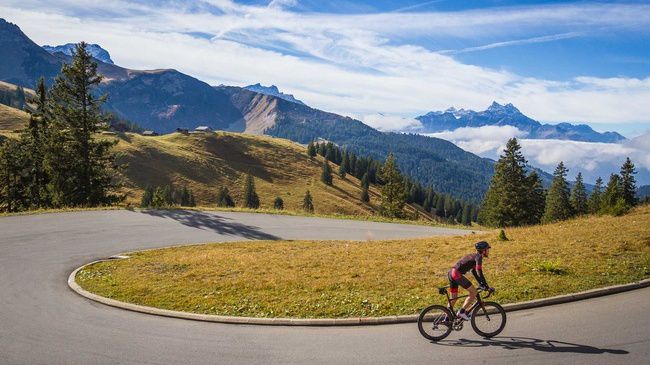 This loop starts in Aigle and goes in search of the classic passes of the Vaud Alps. The little town of Aigle in Switzerland’s Chablais region is home to the UCI, the International Cycling Union. The first few kilometres in the Rhone valley are an opportunity to warm up before the ascent to the Croix pass (alt. 1778m). Featuring a difference in altitude in excess of 1300m over a distance of 23km, this pass is one of the longest and most arduous Switzerland has to offer.  During the climb, you pass through the village of Villars-sur-Ollon, which hosted a leg of the Tour de Romandie won in 2016 by British cyclist Chris Froome.  Following a descent of 8km, you reach the village of Les Diablerets and start the ascent to the Pillon pass (alt. 1546m). The summit marks the linguistic border with Swiss-German-speaking Switzerland, and you soon find yourself in the famous resort of Gstaad. A few kilometres further on and you re-enter French-speaking Switzerland.  At Château d’Oex, you head left for the Mosses pass, which featured in the 2016 Tour de France. The ascent is interspersed with level sections and passes through the village of l’Etivaz, famous for its eponymous cheese. The pass at alt. 1445m precedes the long final descent back to Aigle.  This loop can equally well be started in Villars, Les Diablerets, Gstaad or Château d’Oex.