We spent time on outstanding country roads until hitting populated areas along the Cère River when the land flattened and we sped along on a relatively major road that generally had little traffic. Only in the 25 or so kilometers before Souillac did we have to climb to a plateau where we had some rolling hills before a long descent into Souillac. After the initial climb to the plateau where we stopped for a second lunch, my wife decided that it was "Sarlat or bust". So, despite the relatively late hour and the 30 miles or so to go, we hustled on and arrived in good time just before 6:30 PM. It was our highest average speed of the trip at 10+ mph. So, as anyone will appreciate, we’re not going anywhere very fast.


My wife and I have been doing self-supported tours in Western Europe (a majority in France) since 1993.  This series of rides covers our 2005 2 month route through parts of France.  Our beginning and ending point is near Chadurie (south of Angoulême) where our friends have a farm with Gites and Chambres d'Hotes.


We rode our Dawes touring bicycles purchased in 1993 heavily loaded with 700Cx32 tires.  All of our riding was on paved roads, mostly with very little traffic.


If any questions, feel free to email me at jeffkadet@netdiving.com 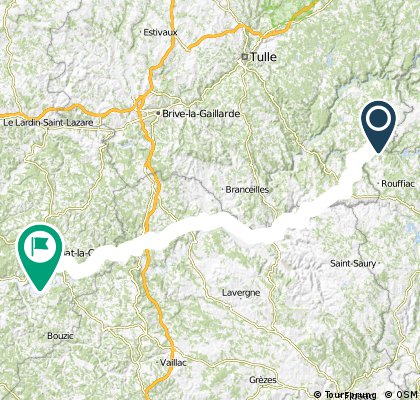